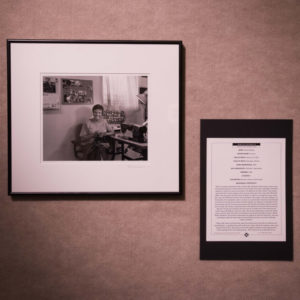 This exhibit combined the artistry of black and white environmental photographs with excerpts of stories as told by various ages of women who have come to the West from their homeland in the Basque Country.  Photographer, Peter Oberlindacher, provided this insight: “These portraits are intentional and without pretense, as are the women I photographed. My goal was to capture the impressions that these Basque immigrant women left with me: determination, graciousness, enthusiasm, and pride. Most of all, I wanted to show their inner strength, which I suspect has played a significant role in the success of the Basque people in this country.”  While interviewer, Begoña Pecharroman, reflected:  “These tales helped tell the history of the Basque people in Idaho and the United States. The most moving and important thing to me though, was that we were constructing the history of Basque women, and women in general, which has long been ignored or diminished.”  The character, fortitude and dignity of these women is demonstrated through the use of light and natural interior and exterior backgrounds.  Excerpts of their stories include themes of work, oppression and life in their homeland as well as immigration and integration into society in their new home.