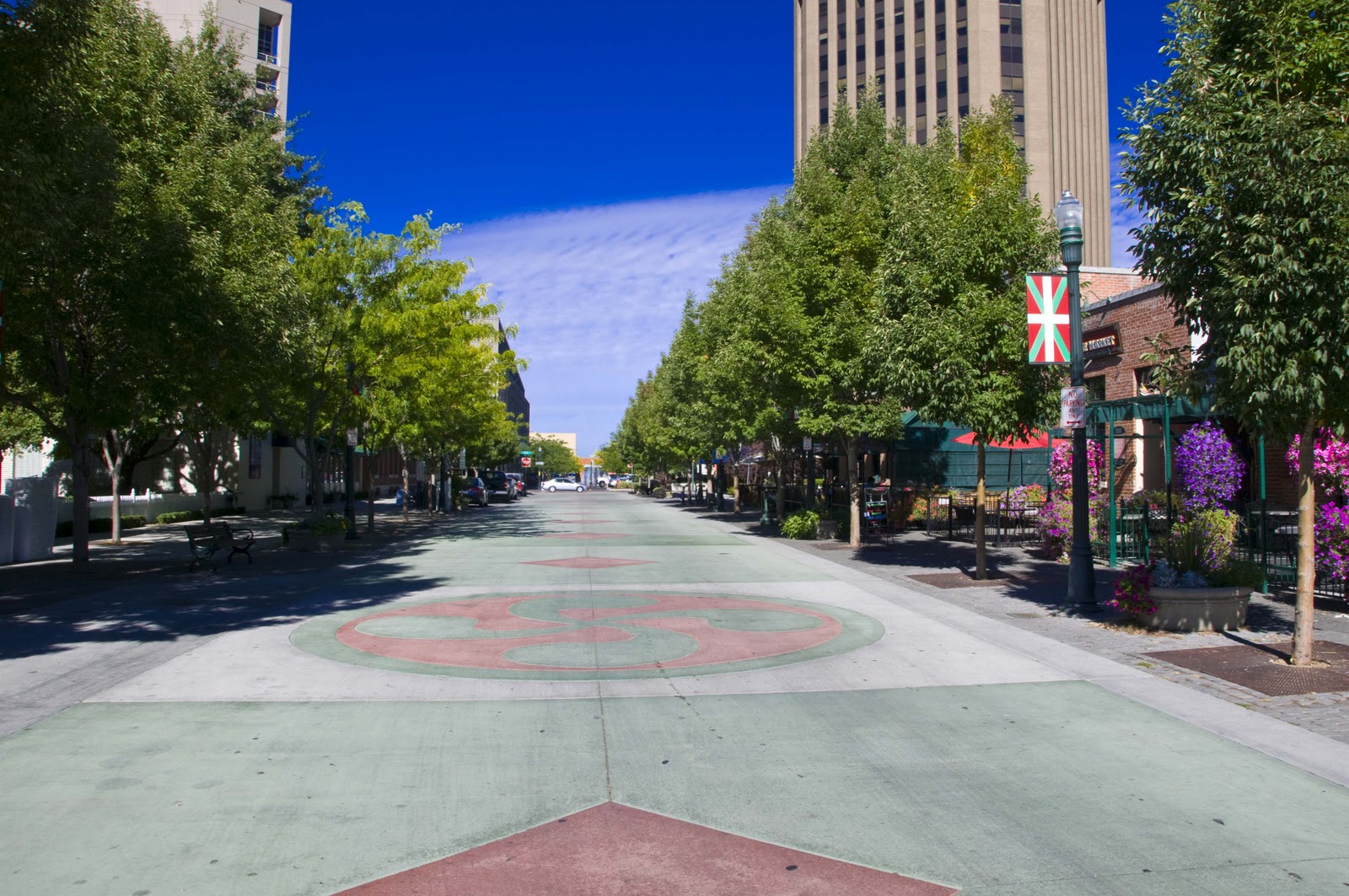 “Meet you at the Basque Block”!….a phrase commonly heard these days in Boise, Idaho and one that directs locals, tourists, and everyone in between in the capital city to a place that’s truly unique. The Basque Block is steeped in history and is known as home to one of Idaho’s most well-known ethnic groups – the Basques!

One of the first plotted areas of the city, Grove Street was home to early, prominent Boise families, but as time moved on and the streetcar system was developed, the family names of Moore, Cartier, and Redway were replaced by names like Letemendi, Yribar and Arregui.  The boarding house network was a great one and signs of this important piece of the Basque immigrant story are still very present in the historic buildings of the Basque Block today.

The Cyrus Jacobs/Uberuaga House, built in 1864 and used as the Jacob family home for forty years, began being rented by the Galdos, Bicandi and Uberuaga families beginning in 1910.  The Uberuagas purchased the home in 1928 and operated it as a boarding house until 1969.  The home has been restored and is the primary artifact of the Basque Museum. Literally thousands of people pass through its doors each year to get a glimpse of what the boarding house life must have been like in its hey day.  Two doors down the street the Anduiza family built a large hotel-style boarding house in 1914 with a full fronton inside.  It was purchased in 1993 by Richard Hormaechea and Adelia Garro Simplot who wanted to save the building. Attorneys, realtors, and businesses now occupy the upper floor rooms that were the bedrooms while the court is used many times per week by members of the Boise Fronton Association for mostly pala and an occasional handball game. A Basque band stores its equipment and practices in a couple of the lower rooms and the Museum is allowed to give tours and have students and guests give a try at playing esku pilota, or handball.

The number of boarding houses declined as fewer herders came from the Old Country, but there was still a need for a place to meet.  The Basque Center, built in 1949 at 601 Grove, has been just that place.  Home to hundreds of dinners, dances, wedding receptions, funeral gatherings and more games of mus than one could count, it’s also been home to the Oinkari Basque Dancers, Boiseko Gasteak Basque Dancers, and more recently, the Txantxangorriak music group.  It has filled a necessary niche in the Basque community, a place to preserve and celebrate their culture.

The Basque Museum & Cultural Center was established in 1985 in the Jacobs/Uberuaga House with the goal to preserve and promote Basque history and culture with one of its primary functions being educational outreach.  It acquired the building next door and established the main gallery, store, offices and archives there beginning in 1993.  In 1990 the Museum acquired the Cub Tavern and within two years Dan Ansotegui had opened the Gernika Basque Pub & Eatery, a quaint place offering Basque and American fare.  In 1999 Dan opened The Basque Market, and that too continues today, now operated by Tony and Tara Eiguren, offering wines, foods, cooking classes, and catering Basque food to gatherings within the community.  Leku Ona, a full-course Basque restaurant, opened its doors in late 2005, in what was the Belaustegui boarding house and Chico Club.  It offers savory traditional dishes with patio, banquet, and outdoor dining areas.

The single incident that was the defining moment for the Basque Block came with the tragic loss of Pat & Eloise Bieter in a car accident in 1999.  It prompted the Boise City Arts Commission to meet with Basque community leaders to propose some public art to be placed in the area in their memory.  The ideas that came from that meeting…that we needed to bring our culture from behind the walls and out to the public…is what has really created the unique ambiance that now exists on the Basque Block today.  Curbs and grass were removed and a green street with red lauburu symbols, granite sidewalk inserts that include five hundred surnames from A to Z representing many of the Basque families that came to this area over the past one hundred years.  Some of the four hundred pound granite slabs were engraved with songs complete with lyrics and music, and six represent the provincial coat of arms of the Basque homeland. A group of international sign-painters, The Letterheads, created a  mural depicting important aspects of Basque history and culture. “Laiak”, the public art sculptures dedicated to the Bieters and to the Basque community, stand as festive entry pieces welcoming visitors to the area, and interpretive signs on all of the buildings tell the story of the neighborhood and buildings as they’ve changed over time.  The street grade was raised to create an open feeling and when it’s blocked for special events, the crowds span with ease from street and sidewalk to patio, as if they truly were in an outdoor plaza in the Old Country.

In the summer, as you round one of the corners, you’ll generally hear the sound of glasses clinking, people chatting, and a laugh or a heated discussion or two.  After all, when two or more Basques are gathered together, there will generally be more than five or six opinions!  You’ll smell garlic wafting off the ethnic fare being served from bustling kitchens to café-style dining tables on the street, a hint of a cigar from a table outside the Basque Center, and the pungent smell of flowers welling out and over the many pots on the street or hanging from every building.  This is the Basque Block.  It’s a place that’s been built over time, with the efforts of many people from diverse backgrounds and cultures.  It’s a wonderful gathering place for Basques and non-Basques alike and is now an important piece in the fabric of what is Boise.

Get a Custom Group Tour